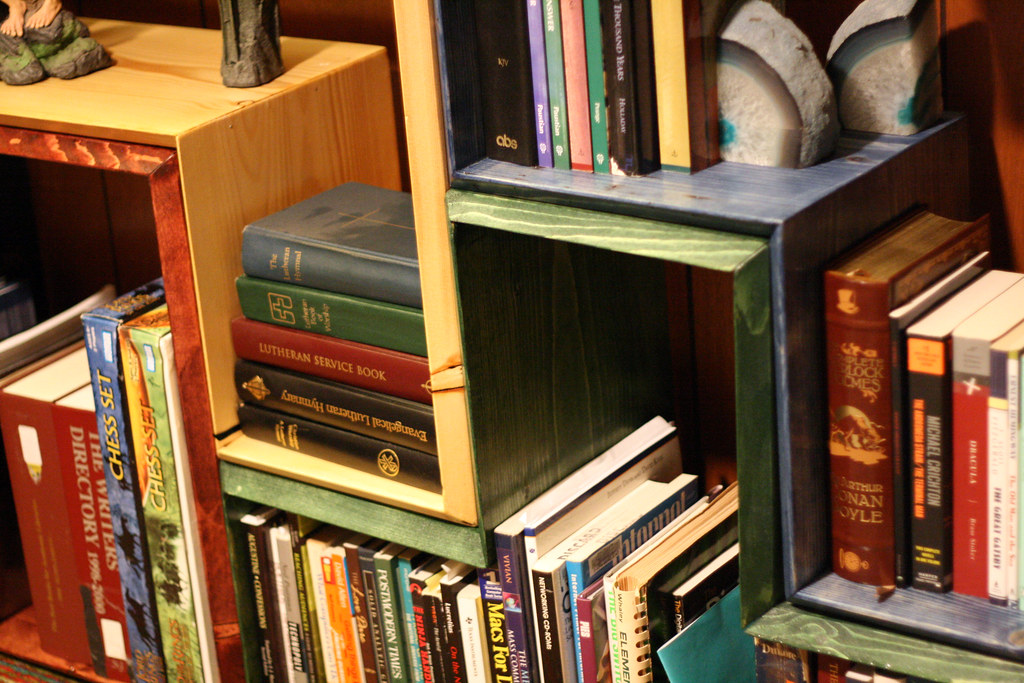 This is a project which has no definite finishing point... meaning, I will probably keep making new pieces forever. I saw the idea on instructables.com and decided to make one on my own.

I went with pine for my wood, partly because it was cheaper than other woods but also because it was easier to work with. I measured my books and did some math. I like math. I decided that I would use 12 inch wide boards. (1″x12″ boards are really 3/4″x11 1/4″ boards, so a single square block would have sides of 11 1/4″. Scaling up, 2 blocks would be 22.5″, 3 would be 33 3/4″ and 4 would be 45″ in length.) I did this because I wanted the blocks to be square. This means I could stack them going around a corner and have them all fit together nicely. (Also, I’m a bit of a perfectionist.)

I decided early on that I wanted to bevel the pieces like actual tetris pieces, so that the inside of the shelf would have more surface than the outside. This really helps make it look authentic.

I started off by making the square. It was easy to do and I knew I wanted it to be red. I used a “Red Oak” stain and it looked fantastic. I then took a sample of the stain to the hardware store to look at options for the other colors. Originally I had toyed with the idea of simply using different shades of wood stain, but I kept thinking that would be far too subtle. The guy at the hardware store took me to the deck stain, and told me that it would color my wood and still let me see the grain, those were my two requirements. As I looked at the outdoor stain, I asked if there were any indoor stains that could be colored. He then showed me a water based stain which was meant for indoor use and could be colored to a number of different hues. (I don’t know why he didn’t take me there first, but hey, I found it.)

I bought the blue to see if it would match the red and it was perfect. The next day I went back and got the green. I knew I wanted a yellow and a brown for my other colors. I decided to use a “natural” stain for the yellow color, since that was a bit easier than getting a colored stain mixed. I didn’t have enough wood to create a long block, but when I do that will be stained with a dark walnut stain.

I really wanted to wood to show and the grain to stand out with the project and the water based stain really did a great job.

After I had the pieces stained I finished them off with two coats of a high gloss polyurethane.

Hardest part of the job was the T-shaped piece. The board I had was warped and it didn’t want to come together nicely. I affixed most things together using small wire nails and glue. I had to use screws on the green piece, and then I accidentally dropped it after I was finished with it. All the glue snapped, so it isn’t quite as strong as it could be. In the future I think I’ll use screws on all my pieces, just to help them hold a little more weight.